“The essence of giving and receiving does matter, no amount of words to express the schoolchildren’s gratitude for the compassion, concern and the gifts they received. They will surely remember that encounter with TPEF for the rest of their lives. TPEF has successfully reached out the least served children in Paracelis by giving school supplies that inevitably bring joy, hope and inspired them to pursue their studies,” Public Schools District Supervisor Jacinto Yassan said. 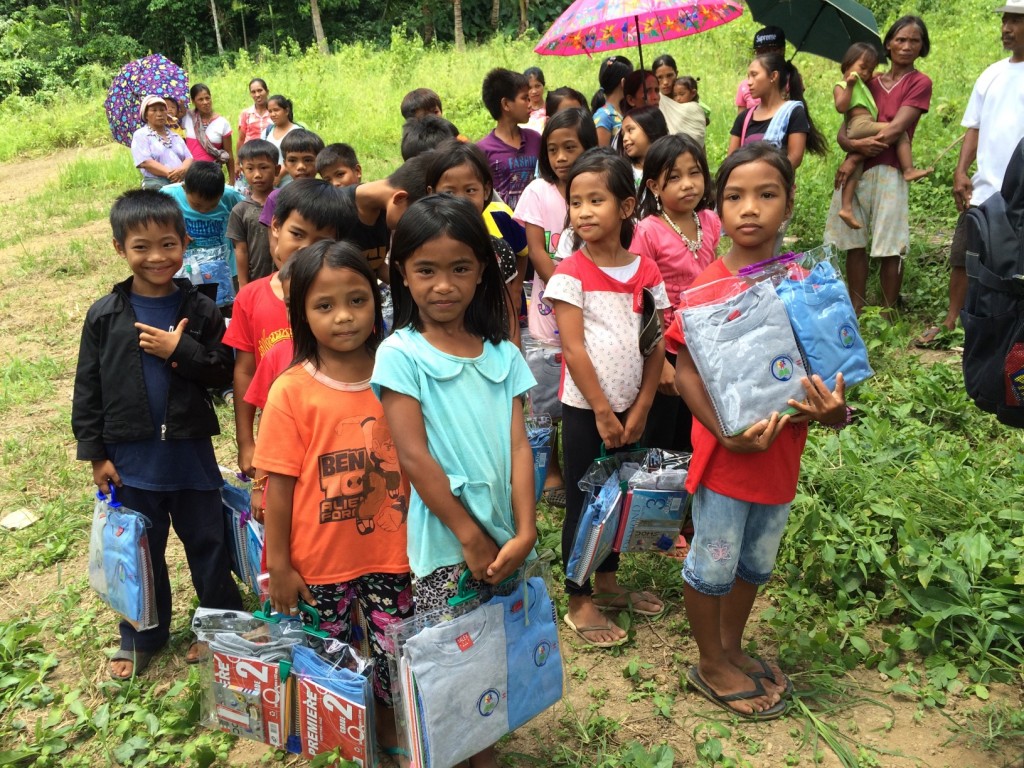 In June 23, 24 and 26 the TPEF team transported the school kits on a mini-dump truck provided by the Paracelis local government to Daburab, Baay, Asiga, Ambatotong, Carupaan, and Pagga areas. These isolated areas are not accessible by public transport. In most cases, the group has to travel through long narrow roads with sharp curves and deep ravines below.

When the truck loaded with boxes of school kits could no longer pass through the rough and mostly muddy uphill terrains in sitio Ambatotong, the group, carrying folder bags of school kits, hiked through the rice paddies to reach the new extension school. With difficult trails at mid-point going to the makeshift school in sitio Carupaan, they walked along the farms of corn and hilly terrain. The school kits, on the other hand, were transferred on “paragos,” or carabao-drawn wooden carriages. Paracelis is one of the poorest towns in Mt. Province, located in the northern part, about 480 kilometers from Manila.

School kits on paragos for the children in Carupaan school

Hiking to Ambototong extension school nestled between the hills

TPEF team on a truck with school kits for the schoolchildren

According to Yassan’s paper, the far distance from home to nearby school affected the students’ participation in the school. Some students either fail to enroll or when already enrolled, have difficulty in attending school because they hike long distance for hours. To address such problem, various stakeholders in the respective community contributed to build the nine makeshift schools.

The TPEF team during their outreach learned that a teacher purchased a lot and donated it for the construction of the new school, a three-makeshift classroom made of sawali, or woven split bamboo mats for walls of the classrooms, wood and galvanized iron metal sheets for roofs. A community contributed to buy a certain lot for the school site and afterwards constructed makeshift classrooms. Another individual donated the land for the school site. The Schools Division Office and the local government provided G.I. sheets and other construction materials. Cash assistance was also provided. In addition, the communities donated lumbers and rendered free labor to build the makeshift schools.

Other social development initiatives in Paracelis

In addition to the 500 school kits, the TPEF conducted Computer Literacy Trainings to 51 public school teachers with four staff of Torm Shipping Philippines as volunteer trainers. “The hands-on training is very useful in preparing instructional materials, presenting lessons and computing grades, “said by a participant. In line with the foundation’s advocacy on quality education, it also turned over two LCD projectors, 2 laptops and two printers to the District Office for public schools’ use. “Thank you TPEF for reaching out to the marginalized families in the newly opened schools from the distant sitios…our profound gratitude for the humane service you have rendered to us,” Yassan said during the closing ceremony of the four-day outreach program.

The distribution of school kits to 500 schoolchildren, from kindergarten to Grade 7, has been made possible through the proceeds from advocacy shirts under TPEF’s Share Goodness Advocacy Campaign and donations by individual employees of Torm Denmark and Torm Shipping Philippines. It was launched October 2015 aimed at developing awareness on the foundation’s education advocacy in the rural areas and generating support among Torm seafarers and employees. The team for the SDI in Paracelis is composed of two TPEF staff, one scholar, four TSP employees, the Paracelis District Supervisor and two Mt. Province Division Office personnel.

TPEF Searches for Scholars in Remote Communities
Comments are Off

TPEF Conducts Webinar on Mental Health and Wellness
Comments are Off